Canoeing On The Chapleau River In Northern Ontario 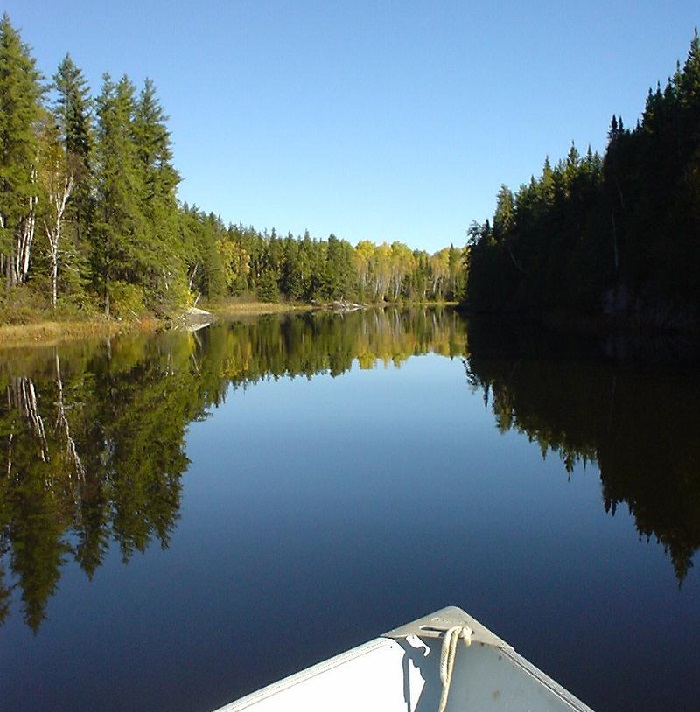 Chapleau is located in the heart of the Canadian Shield, a large area of exposed Precambrian igneous and high-grade metamorphic rocks that form the ancient geological core of the North American continent, and are covered by a thin layer of soil. It is an area mostly composed of igneous rock, which relates to its long volcanic history. It has a deep, common, joined bedrock region in Eastern and Central Canada that stretches North from the Great Lakes to the Arctic Ocean, covering over half of Canada. It also extends South into the Northern reaches of the United States. Human population is sparse, and industrial development is minimal, while mining is very prevalent.

The Canadian Shield was the first part of North America to be permanently elevated above sea level and has remained almost wholly untouched by successive encroachments of the sea upon the continent. It is the Earth's greatest area of exposed Archean rock.

The multitude of rivers and lakes in the entire region is caused by the watersheds of the area being so young and in a state of sorting themselves out with the added effect of post-glacial rebound. The Shield was originally an area of very large mountains (39,000 feet) with much volcanic activity, but over hundreds of millions of years, the area has been eroded to its current topographic appearance of relatively low relief. It has some of the oldest (extinct) volcanoes on the planet. It has over 150 volcanic belts (now deformed and eroded down to nearly flat plains), whose bedrock ranges from 600 million to 1.2 billion years old.1

Chapleau is located in central, Northeastern Ontario, in the heart of the Canadian Shield. Chapleau is geographically isolated; the nearest cities are Sault Ste. Marie, Timmins, and Sudbury, but all are more than a two-hour drive away.

With over 2,700 square miles of land, the Chapleau Crown Game Preserve, north of the town, is the largest animal preserve in the world. Protected wildlife include moose, black bears, pygmy shrews, bald eagles and loons. All forms of hunting and trapping have been forbidden in the preserve since the 1920s. The result is an area with abundant wildlife. Over 2,500 moose and over 2,000 black bears reside within the game preserve. Logging does occur within the preserve, as does fishing.2 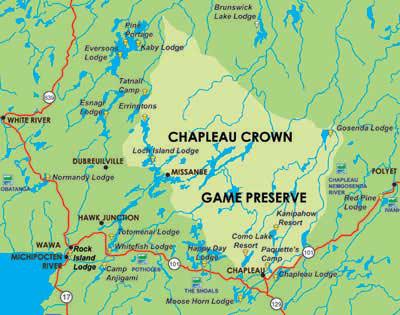 From its source in Chapleau, Ontario to its mouth in the Chapleau-Nemegosenda River Provincial Park, the course of the wild and untamed Chapleau River is 65 miles and is accessible only by canoe. It widens to more than a thousand feet to become a lake and can narrow to less than a hundred feet in other areas. Miles of whitewater rapids, lakes and short portage points, where the river disappears, provide for the experience of a lifetime in this pristine land.

Entering The Rapids On The Chapleau River 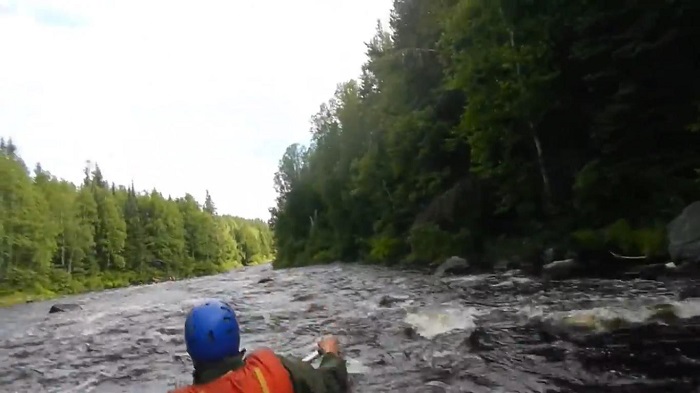 The Course of Chapleau River 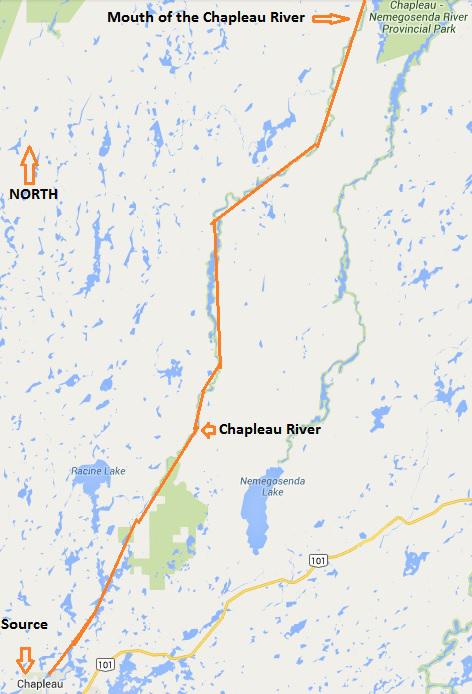 We left our camp near Jackson, Michigan early in the morning on a bus packed with supplies, a trailer toting 6 Grummand aluminum canoes, a guide and 11 boys, teaming with enthusiasm. Our destination was Chapleau, Ontario, a hamlet about 200 miles north of Sault Ste. Marie. Except for the guide, we were all only 16, yet we were strong swimmers with an expertise in canoeing and miles of practice under our belts on the waterways in the Waterloo Recreation Area in Central Michigan and elsewhere. It was the summer of 1962, long before the advent of computers and mobile phones. We knew that we had to live up to our expert reputations when we embarked on the wild, untamed Chapleau River in the Chapleau wilderness, an area accessible only by boat. We knew that our lives depended upon our skill.

We were trained in all aspects of canoeing, including paddle strokes, righting a capsized canoe in deep water, and portaging. The paddle strokes weren't difficult to learn, but took a lot of practice to perfect. The sternsman's job was to navigate the canoe in calmer waters, by using the J-stroke, which kept the canoe traveling forward in a straight line, and the sweep-stroke to turn the canoe. The bowsman's job was to provide power for the forward movement of the canoe. The bowsman's job became crucial in running rapids since he was the first to see rocks that were submerged just below the surface and used the point-stroke and other maneuvers to avoid hitting them. The sternsman usually couldn't see submerged rocks until it was too late.

Uprighting a capsized canoe in deep water is a fairly simple process when you have a buddy canoe nearby. The buddy canoe is positioned perpendicular to the capsized canoe, which is then turned bottom side up and slowly pulled over the center of the upright canoe, allowing water to drain into the waterway. The canoe is carefully turned upright and pushed back into the water.

We arrived in Chapleau late in the afternoon and planned to camp on a site on the river, a short distance from the town. The main street in the downtown area was a dirt road, and the buildings were old, wood frame structures. It's interesting that this town, that some would consider to be a backward community, installed a wireless mesh network in 2005, the first of its kind in Canada. [2] The Chapleau Crown Game Reserve is a long standing example of the love and stewardship that local residents exhibit in conserving the earth's wilderness.

From our first launch, we became a part of that stewardship, influenced by the beauty of the wilderness river, pristine as it was when the first explorers visited the area. We felt like pioneers in our own right. We camped that night on bedrock in a clearing by the side of the river a couple of miles from Chapleau, a campsite that was typical of the ones we would find in the days to follow. We pitched our tents, gathered wood for a fire, prepared dinner, sat for a time by the embers and looked into the pitch black sky with a million stars shining over us.

At dawn's first light, we watched moose on the opposite bank drinking from the river, a common sight on our journey. We ate breakfast—hotcakes, spam and dehydrated eggs, brought to life from water from the river. We packed our tents and stowed our gear in the canoes and shoved off for our first day of adventure. We traversed Chapleau Lake and shot down 7 Mile Rapids, an exciting ride, then camped for the night. The next day (Day 2), we explored the islands in Henderson Lake and camped on the north shore for the night. The following day (Day 3), a short day of canoeing, we camped north of D'Arcy Lake, near 18 Mile Rapids, swam in the river in the afternoon and rested for our next day on the rapids. In the morning (Day 4), we shot the rapids and camped on the shore of Robinson Lake. On the fifth day, we had two portages before we arrived at the road that would lead home.

The portages were difficult due to underbrush and uneven ground. With a man on the bow and a man on the stern, we lifted the canoes over our heads and supported the craft on our arms. The portages were about a quarter of a mile, and we had to return for our gear after we reached the river again. 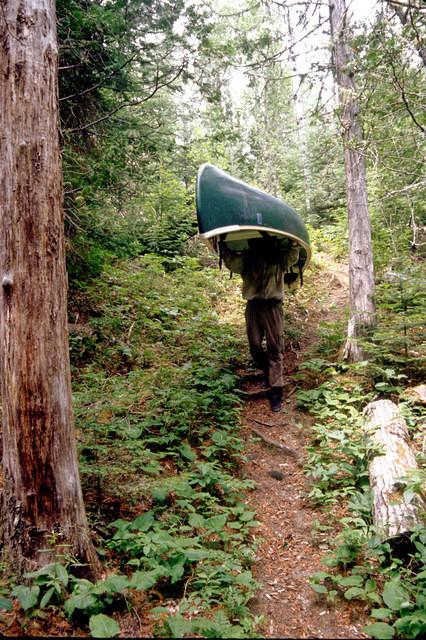 Our trip down 7 Mile Rapids went as smoothly as could be expected. Occasionally, a canoe would approach a submerged rock, and we would correct our course as we moved forward. Finding ourselves jammed into a bank of the river, we would push out toward the flow of the river and proceed on our journey. We found ourselves intact in the calmer waters at the base of the rapids, and none of the canoes capsized.

Downriver, where the water calmed, we found a resting spot onshore among the large boulders, a refuge, where we could think of the thrill of riding the rapids to victory. Yet, we knew as we continued on our journey that other swift rapid runs awaited with more thrilling challenges.

We could hear the roar of 18 Mile Rapids from a bend in the river near the whitewater. Our guide gave the command for the first canoe to proceed around the bend into the rapids, waiting a couple of minutes to give the okay for the second canoe to leave. We left a lot of room between canoes in the event that one of them ran into trouble, snagging on a rock or a low hanging branch over the river, which became obstacles for the canoes that followed.

At the bottom of the rapids, where the whitewater ended, there was still a heavy current pulling the canoes downstream. A hundred yards into the calmer waters around a bend in the river, a tree branch was cantilevered across the river, with no room to go around it. The first canoe hit the branch and capsized, with the second following in its place. The other canoes made it to a clearing on shore, and we waded in the shallow water to help the boys in the capsized canoes. We rested for a half hour, then walked down the trail to see what lay ahead. A few feet down the trail, we began to hear the roar of water falling. Fifty yards later, we saw a waterfall, 20 feet high. We knew immediately that we had avoided peril by running into the large tree branch over the river.

Once we entered the rush of whitewater rapids, there was no turning back. We could only hope to avoid rocks and obstacles in our path with the pointing stroke of the bowsman and the backward stroke of the sternsman. We discovered on our journey that obstacles to navigation could be a good thing. Either nature or a good Samaritan had placed that branch in our path so we couldn't move forward, forcing us to avoid the danger of the waterfall that lay ahead.

On our journey, we learned to leave our campsites as pristine as we found them. Part of conservation is to leave a minimal footprint on the wilderness.

One of the great lessons we learned from our adventures on the Chapleau River, in the wild, untamed land in Northern Ontario, was that we were meant to be stewards of the earth. We belong to the land for a brief period of time. The land doesn't belong to us. As the global population continues to grow,, and cities continue to encroach on nature, we have to find ways of protecting our natural environments.

We loaded and boarded the bus that would take us home. Before we left, we could see a large, black bear standing on its hind legs in the woods nearby. He seemed to be looking at us. It was almost like he was bidding us farewell.