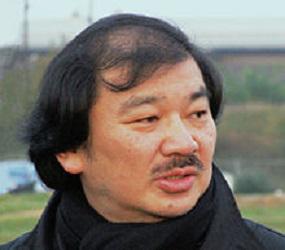 Shigeru Ban was the 37th recipient of the prestigious Pritzker Architecture prize in modernist architecture for 2014. The Pritzker Jury cited Ban for his innovative use of material, and his dedication to humanitarian efforts around the world, calling him "a committed teacher who is not only a role model for the younger generation, but also an inspiration."

He was profiled by Time magazine in their projection of 21st century innovators in the field of architecture and design.

One might guess that innovation in architectural building materials would be in some high tech field like nanotechnology that would create stronger and lighter structural materials. However, out of the box thinking led Ban right back into the box in his use of recycled cardboard tubes to build temporary shelters for disaster victims.

Unaffected by the trappings of materialism, Ban's mission is to serve his fellow man by using his talents. In an interview with CNN, Ban said, "I was very disappointed about our profession. I thought that, as architects, we could work more for society. Historically speaking, architecture clients are people who had the money and the power. They wanted to visualize power and money with monumental architecture. That was the architect's basic job historically. I'm not saying that is a bad thing. I, also, want to make a monument, but I thought we should use our experience and knowledge for the public, and victims of natural disasters, too. I get the same satisfaction when I design a building for a disaster. There is no difference. The only difference is I am not paid."

When asked if he owned a house, Ban responded, "I have no desire to own my own house. I'm living in my apartment I designed. I'm busy enough to make great house for someone else." Obviously, home ownership would be a distraction taking him away from his humanitarian mission.

Cnn asked, "With even more opportunities coming your way because of the Pritzker Prize is there a risk this prize could actually distract you from continuing your humanitarian work?"

Ban answered, "When some people receive a big award there are more opportunities for their projects and to expand their offices. I don't want to make my office bigger. I like to design everything by myself and to go to the sites. I want to keep working in disaster areas. If I get more projects, then I can spend less time on each project. I don't want to lower the quality of each project. I think we have to be very careful to keep doing the same things, as we have done."

CNN asked him, "How did the idea of working with cardboard come to you?" His response was, "The strength and durability of a building has nothing to do with the material. Even a building built in concrete can be destroyed very easily. There can be a permanent building made out of cardboard tubes. In fact, many of my temporary buildings have become permanent. When I first used the cardboard tube for the interior, I knew this is strong enough to be a part of the structure."

Buckminster Fuller, the architect who designed his own building system to construct the geodesic dome, inspired Ban to create his own system as well. Due to its shape, the geodesic dome has equal pressure at every point on the dome, allowing lighter materials to be used in its construction. Ban realized early in his career that engineering played a crucial role in using cardboard tubes in building a structure.

Ban's architectural style is heavily influenced by the philosophy of Japanese architecture.

Inner space divisions are fluid, and room size can be modified through the use of screens or movable paper walls. The large, single space offered by the main hall can be divided according to the need. Some walls can be removed and different rooms joined temporarily to make space for more guests. The separation between inside and outside is not absolute as entire walls can be removed, opening a residence or temple to visitors. Care is taken to blend the edifice into the surrounding natural environment.

Frank Lloyd Wright's philosophy of organic architecture was strongly influenced by Japanese architecture during his residency in Japan when he designed the Imperial Hotel in Tokyo.

Organic architecture is a philosophy which promotes harmony between human habitation and the natural world. With design approaches so sympathetic and well integrated with its site, buildings, furnishings, and surroundings become part of a unified, interrelated composition.

Although Ban doesn't cite Wright as an influence on his style, both can claim the same source of inspiration in the Japanese philosophy of architecture. Wright was so captivated by Japanese art that he collected it throughout his lifetime.

Ban is a humanitarian and an ecological architect. Ban's work with paper and other compatible materials is heavily based on its sustainability through the use of local materials and recycled paper in the building process, and the ability to recycle all building materials. 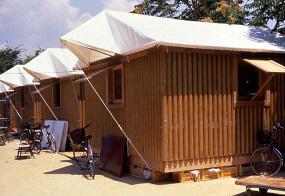 After the 1994 Great Hanshin magnitude 7.2 earthquake devastated Kobe, Japan, the government offered Ban a reconstruction project. Not only are his temporary shelters very cheap and easy to build as they incorporate community participation, but they offer more versatile living conditions compared to traditionally used tents. The 172 square feet modules have paper tubing for walls with small gaps between each member allowing for ventilation and can also be taped up to insulate the space. The roof was made of a waterproof tenting material, and the foundation consisted of donated beer crates filled with sandbags. 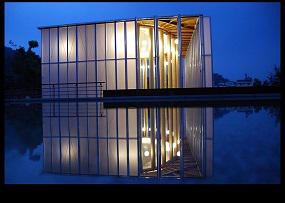 In addition to the temporary shelters, Ban built the The Paper Dome church, a temporary building for the Takatori Catholic Church, constructed from paper tubes used as structural elements.

Ban's interest in using existing materials aligned with his minimalist ideology. There was never a question of manufacturing a different paper material as current technologies such as waterproofing films, polyurethane and acrylic paints can be used to improve a material's properties.

In the design of The Paper Dome in 1995, paper as an innovative building material had to meet rigorous construction codes, so a great deal of structural engineering data was submitted to the government.

In this project, straight paper tube joists were connected by laminated timber joints, which are independently expensive, but coupled with the paper tubing, made for an inexpensive, overall budget. In addition, the 6-foot paper tubes were waterproofed with liquid urethane to minimize expansion and contraction due to humidity variances found in Osaka-Cho Japan.

When the church community planned to build a permanent building, the structure was donated to Taomi Village in Puli Township, Nantou County, Taiwan which had suffered a 9.21 Earthquake in 1999. The deconstructed structure was shipped in 2006 to Taiwan, reconstructed there and is now one of the top tourist attractions in that area. 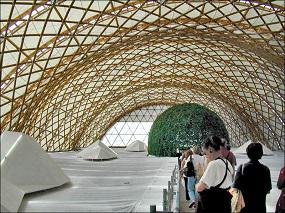 Another project, the Japanese Pavilion in Hannover, Germany was constructed for Expo 2000 and used paper tubing, but at much longer dimensions of 67 feet with 4.75 inch diameters, and less than 1 inch in thickness. It was also waterproofed both inside and out by a coating of polyurethane, satisfying extreme weather conditions and fire protection tests. Surprisingly the paper tubes are very difficult to burn due to its high density. Expo 2000 incorporated a very environmentally aware theme, which influenced Ban's design to allow for full recyclability of the Japanese Pavilion.

Mechanical joinery was substituted by means of fabric tape, which allowed for complicated movement and, also, naturally post-tensioned the structure. The main tunnel of the pavilion was designed as an incredibly large space with dimensions of 242 feet in length by 82 feet in width by 52 feet in height.

The fabric tape was used with a buckle system, which allowed for manual construction and dismantlement. Due to the strict building codes in Germany and the unconventional use of paper as a revolutionary building material, the Japanese Pavilion had to be over-designed and incorporated wooden elements to become more of a hybrid structure. As an innovative addition to the design, Ban substituted the use of a concrete foundation with wooden boxes filled with sand to continue with the recyclable theme. 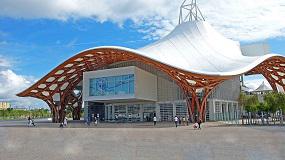 The Centre Pompidou-Metz is a museum of modern and contemporary arts located in Metz, the capital of Lorraine, France. It is a branch of the Pompidou Arts Centre of Paris, and features semi- permanent and temporary exhibitions from the large collection of the French National Museum of Modern Art, the largest European collection of 20th and 21st century arts. The museum is the largest temporary exhibition space, outside Paris, France with 54,000 square feet divided between three galleries, a theater, and an auditorium.

The first piece of the monument, designed by Ban, was laid on November 7, 2006, and the building was inaugurated by French President Nicolas Sarkozy on May 12, 2010. The building is remarkable for its roof structure, one of the largest and most complex built to date, which was inspired by a Chinese hat that Ban found in Paris.

Since its inauguration, the institution has become one of the most visited cultural venues in France outside of Paris. 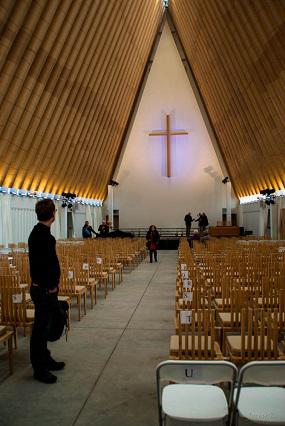 Shigeru Ban is a man of inspiration for all of us. He is a truly humble man, not proud or arrogant, but modest and successful in the midst of all the confusion and complexity of this world. His childhood dream to walk the earth has come true through his work. His architectural style has demonstrated Frank Lloyd Wright's philosophy that "form follows function" and Mies van der Rohe's philosophy that "less is more." He has taught us that beauty and economy are not mutually exclusive ideas.