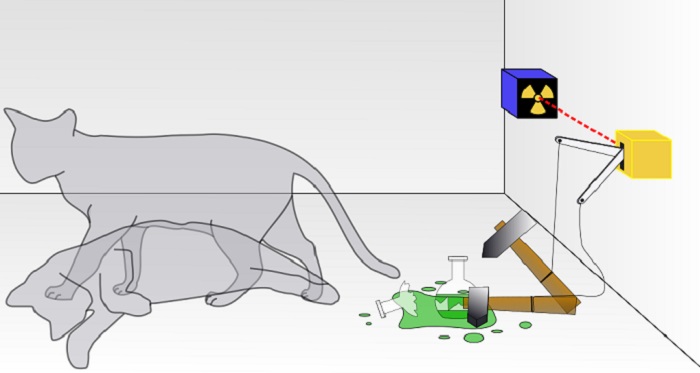 Erwin Schrödinger is well known for his thought experiment of Schrodinger’s Cat, which contemplates what a superposition of quantum states might mean on a macroscopic level.

Quantum superposition is a fundamental principle of quantum mechanics that holds that a physical system, such as an electron, exists in all its particular theoretically possible states (or configuration of its properties) simultaneously, but, when measured or observed, it gives a result corresponding to only one of the possible configurations.

Schrödinger's cat is a thought experiment, sometimes described as a paradox, and was devised by Austrian physicist Erwin Schrödinger in 1935. It illustrates what he saw as the problem of superposition applied to everyday objects, resulting in a contradiction with common sense. The scenario presents a cat that may be both alive and dead, depending on an earlier random event.

"One can even set up quite ridiculous cases. A cat is penned up in a steel chamber, along with the following device (which must be secured against direct interference by the cat): In a Geiger counter, there is a tiny bit of radioactive substance, so small that perhaps in the course of the hour, one of the atoms decays, but also, with equal probability, perhaps none. If it happens, the counter tube discharges, and through a relay releases a hammer that shatters a small flask of hydrocyanic acid.”

"If one has left this entire system to itself for an hour, one would say that the cat still lives if meanwhile no atom has decayed. The psi- function (wave function of space and time) of the entire system would express this by having in it the living and dead cat mixed or smeared out in equal parts. It is typical of these cases that an indeterminacy originally restricted to the atomic domain becomes transformed into macroscopic indeterminacy, which can then be resolved by direct observation. That prevents us from so naively accepting as valid a "blurred model" for representing reality. In itself, it would not embody anything unclear or contradictory. There is a difference between a shaky or out-of-focus photograph and a snapshot of clouds and fog banks."

The Story of Schrödinger's Cat by Cecil Adams